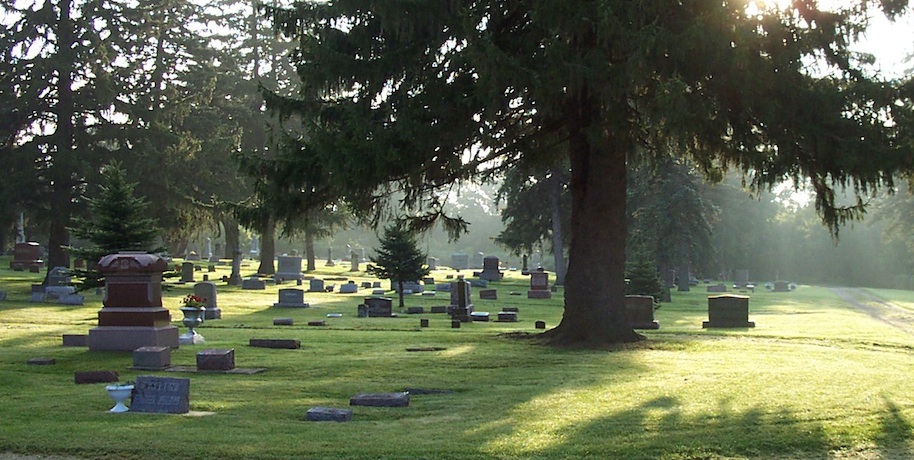 The mission of the Oak Hill Cemetery is to assist with interments; provide care and maintenance of the association grounds; maintain accurate records; and serve as a resource for individuals seeking
​ locations of burial sites of loved ones.
​ 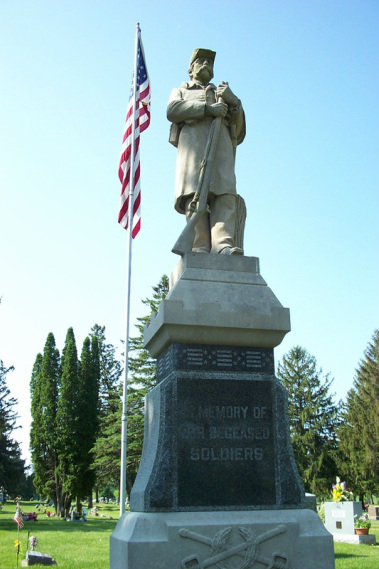 The Oak Hill Cemetery Association was established on February 4, 1868.  A meeting was held in Nashua at Spindler’s Hall, which was organized by electing Philo M. Knapp as chairman.
A planning meeting later established the following officers:

A constitution and by-laws were drawn up and adopted.  A soliciting committee, comprised of Enoch Woodbridge, E. H. Hall and L. Scoles, was appointed to sell lots at a price of not less than $5 per lot and all proceeds were used to buy and improve the original 8 acres that make up the eastern most side of the cemetery.  The original cemetery ground, within Nashua city limits, was purchased for $25 per acre on August 3, 1868 from T. D. Coryell.

As the years passed, more land was added west of the orignial cemetery.  In 1895, five additional acres, in Bradford Township, were purchased by the trustees from George Tracy for $ 400.  The timber was removed, grading was done and streets and blocks platted, all easily accessible by teams of horses.   Trees were planted and Oak Hill Cemetery became firmly established as a fitting “City of the Dead.”  The cemetery had become known for the beautiful view of the Cedar River valley and numerous majestic trees.  In the early years, many burials were of those who had been disinterred from other local cemeteries and reburied here.  The earliest known death of someone re-interred in Oak Hill was John Emery Hall, who died in September, 1855.

The Soldier’s Monument stands at almost the highest point in the cemetery and faces the north. On a foundation of cement is set a base of granite on which is a block of marble with the words, “In Memory of our Deceased Soldiers.”  Above this is the figure of the soldier, six feet two inches in height and cut in one piece from Bedford Granite.  The figure alone weighs 1,500 pounds.  It is as fine a monument to the memory of our departed soldiers as can be found in any cemetery around.  It was dedicated by members of the George S. W. Dodge Post of the Grand Army of the Republic (G.A.R.) and the Women’s Relief Corps (W.R.C.) on Memorial Day, May 30, 1903. The dedicatory address was delivered by the Post Commander, Hon. William B. Perrin, followed by the unveiling of the monument and the flag salute given by the pupils of the intermediate department of the Nashua Public School.

The cemetery by-laws were updated in 1959 to address the changes that had occurred over the past ninety years.  The following year, it was decided that all future casket burials require a burial vault or cement box.

In October of 1990, The estate of Louis Hill, a 1905 graduate of Nashua High School, donated a sizable amount of money to be used for improvements and continued maintenance of the cemetery.  This gracious Hill Trust provides on-going funding which has made many improvements possible, including new fencing, new water lines and hydrants, eighteen flag poles added to line the cemetery entrance, road improvements and new brick columns and gate,
replacing the original archway and gate.

A designated cremation section was added on the western side of the cemetery in 2003, allowing for 125 additional burials in Row 23.  Currently, the cemetery has 5,030 burial plots.  The cemetery burial records were computerized in 2003, and later, the record of all deeds (interment rights) issued since 1870 had been digitally indexed
and added to our on-line burial directory.

Members of the local American Legion, V.F.W., an﻿﻿﻿d other local organizations, on the 100th Anniversary of the original dedication, rededicated the Soldier’s Monument.  This ceremony, which occurred on Memorial Day, May 26, 2003, honored the 75 Civil War Veterans and all other veterans buried at Oak Hill Cemetery.  The Sons of Union Veterans of the Civil War (SUVCW) and local V.F.W. Post held another Service of Re-dedication
and Soldier Recognition on August 29, 2004.

The Oak Hill Cemetery website went on-line in the fall of 2013.  In 2014, the association established the Oak Hill Memorial Trust.  Nine prior memorial accounts were added to a generous donation in 2009 from the
estate of H. Buell Watson, a 1944 graduate of Nashua High School.  More recently, Richard & Alice (Littauer) Grandy, long time pillars in the Nashua community, left a generous donation in 2021.  The Oak Hill Memorial Trust will provide future memorial care obligations for those families, as well as fund future improvements and maintenance to the cemetery grounds.  To meet the perpetual care requirements of the Iowa Insurance Division, a regulatory agency of the state government, the Oak Hill Perpetual Care Fund was reorganized in 2014 to include all previous endowment
funds into a single managed trust account.

CREMATION BURIALS:
No cremains will be buried between November 15 and April 15.